Despite being hailed as a landmark series of reforms by proponents, law enforcement officials from around the state say changes enacted this year to Arizona’s civil asset forfeiture program won’t do much to curb the ability of police to seize cash and property from those they suspect of breaking the law.

Those changes go into effect Aug. 9.

HB 2477, which enacted major reforms to Arizona’s asset forfeiture laws, passed in April with near-unanimous support from the Legislature, despite near-universal opposition from law enforcement.

The new law increases the standard of evidence required to seize property, and strengthens reporting requirements and oversight.

But most law enforcement officials now tell AZCIR that their seizure operations would continue as usual, although some worried HB 2477 presaged future attempts to halt civil asset forfeiture entirely.

But critics say innocent property owners don’t have sufficient protections, and the program offers incentives for police to make seizures for their own agency’s financial benefit. Paul Avelar, a lawyer at the libertarian advocacy group Institute for Justice, said HB 2477 makes, “incremental, but important changes in Arizona’s forfeiture system.”

“Of those changes, none of them really affect policing,” said Avelar, who is representing an elderly couple from Washington that is suing Navajo County over its seizure practices. “What they really affect is stuff that happens after policing.”

Many in the law enforcement community, including from parts of the state that are embroiled in lawsuits and scandals regarding forfeiture, lobbied Gov. Doug Ducey to veto the bill, claiming that the reforms were unnecessary. Among them was newly elected Pinal County Sheriff Mark Lamb, whose predecessor, Paul Babeu, was sued by the American Civil Liberties Union and is under investigation by the FBI for his use of seized funds.

“It’s clear that legislators in Arizona want asset forfeiture to go away at some point in time,” said Jim Molesa, chief deputy for the Navajo County Sheriff’s Office. “They probably will be successful, and I’m telling you, as a 38-year veteran police officer in Arizona, the ability for us to dismantle large cartels and small cartels [would be] dramatically inhibited and we’ll pay a price for it.”

Civil asset forfeiture allows police to seize property – including cash – if officers and prosecutors believe it has been used in, or is the proceeds of, a crime. The new law was passed after an AZCIR analysis in January found that Arizona agencies seized nearly $200 million in property between 2011 and 2015 from people who may never been charged or convicted of a crime.

The analysis also found that reports filed by law enforcement agencies were vague and incomplete, and oversight was nearly non-existent. The state commission tasked with compiling statewide forfeiture figures omitted roughly $20 million, or 16 percent, of overall spending from its reports.

Despite the changes to the civil asset forfeiture program, law enforcement officials said forfeiture continues to be an important tool to target profits of the drug trade and other crimes.

“I’m not one for more regulation, and this is what this law was,” Lamb said. “I think the voters corrected the problem in the counties that were having issues. You saw some change in sheriffs, and I think that was the first step… We’re working hard to implement a lot more protocols in place to make sure any monies that are given out are appropriate and meet the criteria.”

Among the new law’s most significant changes is raising the burden of proof required for law enforcement when it asks a court to declare a suspect’s property forfeited from “preponderance of the evidence” to “clear and convincing” evidence.

Law enforcement officials interviewed by AZCIR said they didn’t foresee this change having an effect on their seizure operations.

“When the cases are presented to us by the seizing agencies, we’re looking for strong evidence, regardless of the burden of proof, whether it was the previous preponderance or it’s the new clear and convincing,” Krejci said. “The purpose of forfeitures is still there: to remove from criminals the means and motives for committing crimes of financial gain.”

Avelar said the increased burden of proof will likely only come into play in the rare case when a property owner challenges a seizure in court.

The new law also addresses many of the gaps in reporting identified by AZCIR. For example, county attorneys and the attorney general will have to report detailed information about each seizure to the Arizona Criminal Justice Commission, including the date, location, property seized, accompanying criminal case and whether the property owner contested the seizure. Before, agencies simply reported aggregated sums of property and cash seized.

While officials generally said they had no problem with additional oversight, Kingman Police Chief Robert DeVries said he was concerned the requirements will put an additional strain on his department’s resources.

“I just want to emphasize, we’re not opposed to transparency, we’re not opposed to accountability, we’re just asking to be within reason,” said DeVries, whose department runs the Mohave Area General Narcotics Enforcement Team. “We understand, as well, that there have been abuses that have occurred with RICO dollars. And we wholeheartedly support holding those individuals accountable for their actions. But don’t penalize and hinder other operations that are in full compliance with the law.”

Arizona Criminal Justice Commission Director Andy LeFevre declined to comment on the new law, but told legislators that the reporting requirements in HB 2477 will be difficult for his state agency to develop and enforce without additional funding. The Legislature did not provide for any increases to ACJC’s budget.

Avelar said the additional information will allow lawmakers and the public to better understand forfeiture.

“Now we will begin to get a better picture of not just the number of forfeitures, but also what those forfeitures are for,” he said, adding that, “as we get more information about what’s going on with forfeiture, we see more and more disconnects from the sort of story that law enforcement likes to tell.”

AZCIR’s January analysis found that half of the money spent from seized funds during the five years examined went to pay police salaries and cover “other operating” expenses.

Law enforcement agencies will also now have to formally request permission from county attorneys to use seized funds. This clarifies an ambiguous provision in Arizona’s property seizure laws that gave county attorneys control over the accounts, but didn’t specify what oversight power they had. County attorney offices must now get approval from the county’s board of supervisors for expenditures made for their own benefit. The same new provision also applies to small counties where all seized funds are pooled together for the benefit of all agencies in the county.

Lamb said he was concerned that the board approval requirement would hamper investigations that depend on secrecy, and said a public vote authorizing the spending could create problems. Pinal County pools most of its money together into one account, meaning any expenditure from the account would need to be approved by the board of supervisors.

“There’s a lot of times where investigations move fast — you need to be able to do things quickly,” Lamb said. “Now that you have to put it in front of board, it becomes public information now. A lot of times, RICO funds were used to do investigations, to buy drugs… so that you could actually get some convictions, and now if you have to go through the board, most agencies aren’t going to do that.”

The new law also requires the attorney general to audit its use of the fund, although no similar audit provision is in place for money spent by local agencies through county attorneys’ offices.

A Navajo County Sheriff’s Office deputy makes a traffic stop near Holbrook, Arizona on November 22, 2016, in an effort to find and seize drugs along Interstate 40. Navajo County uses forfeiture money to partially fund the salaries of its drug task force. (Photos by Emily L. Mahoney) 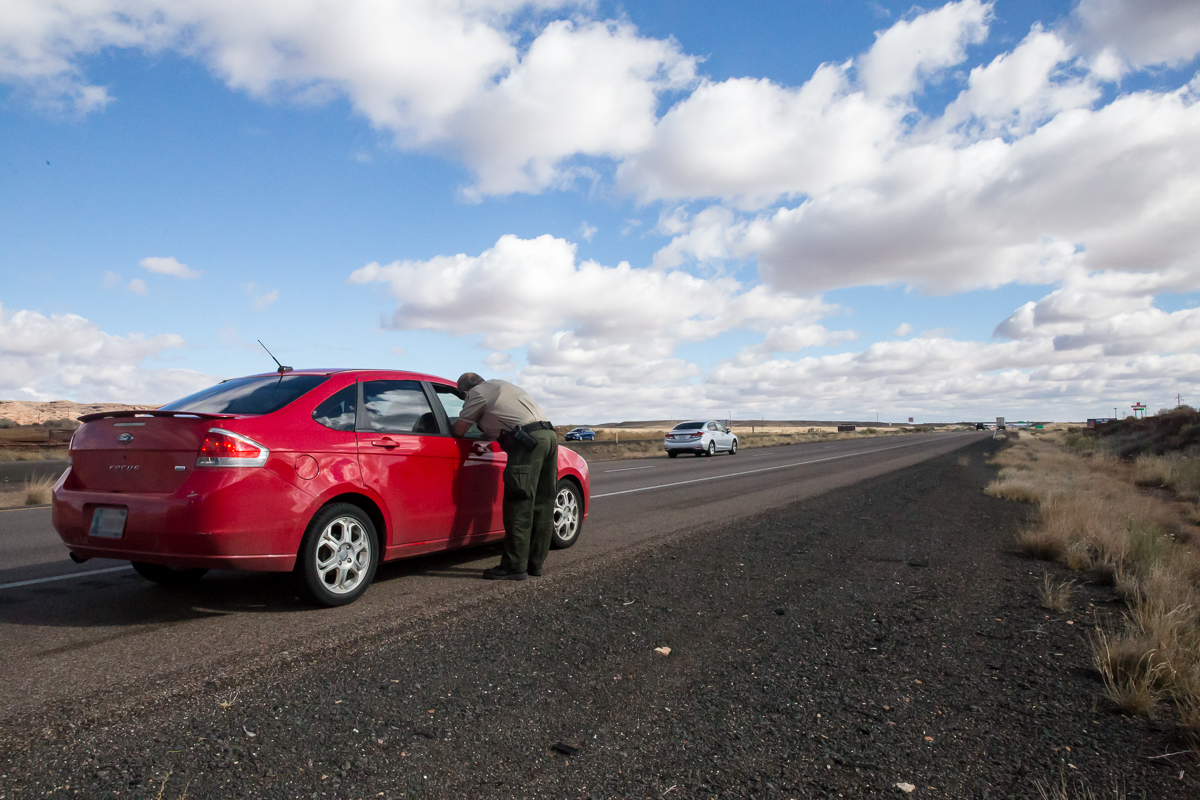 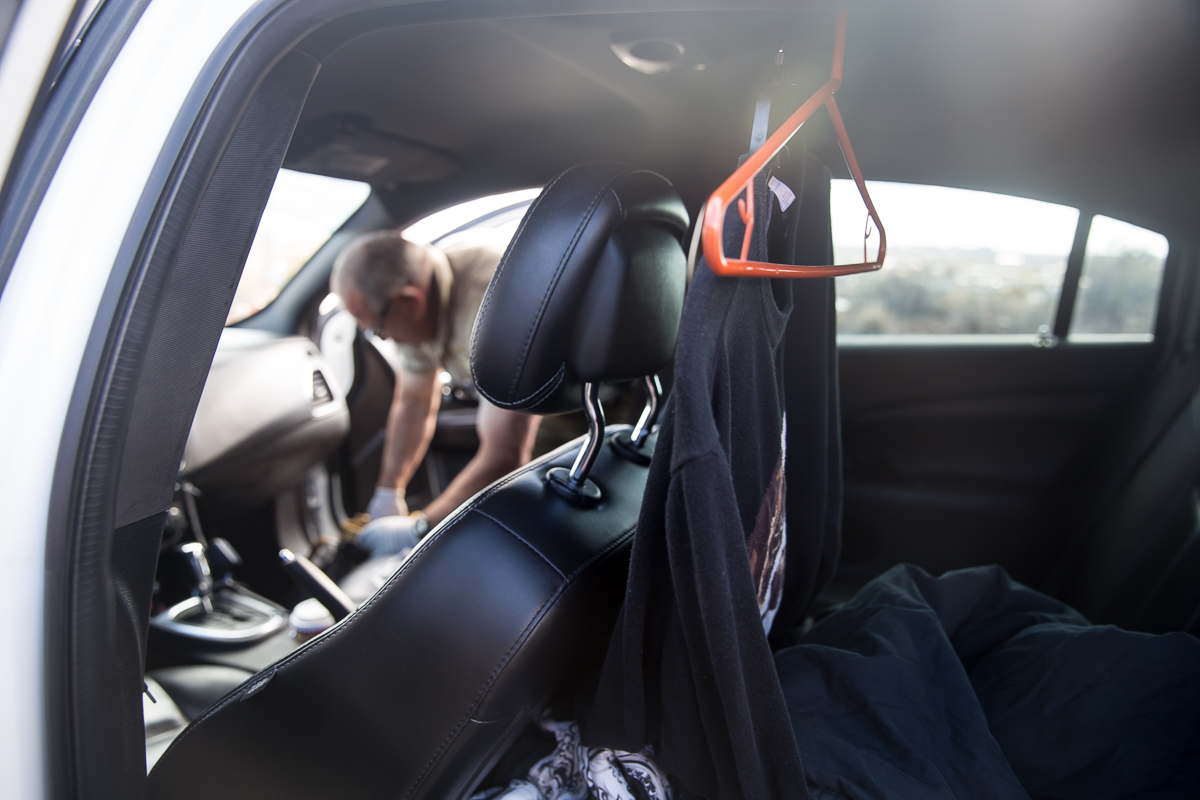 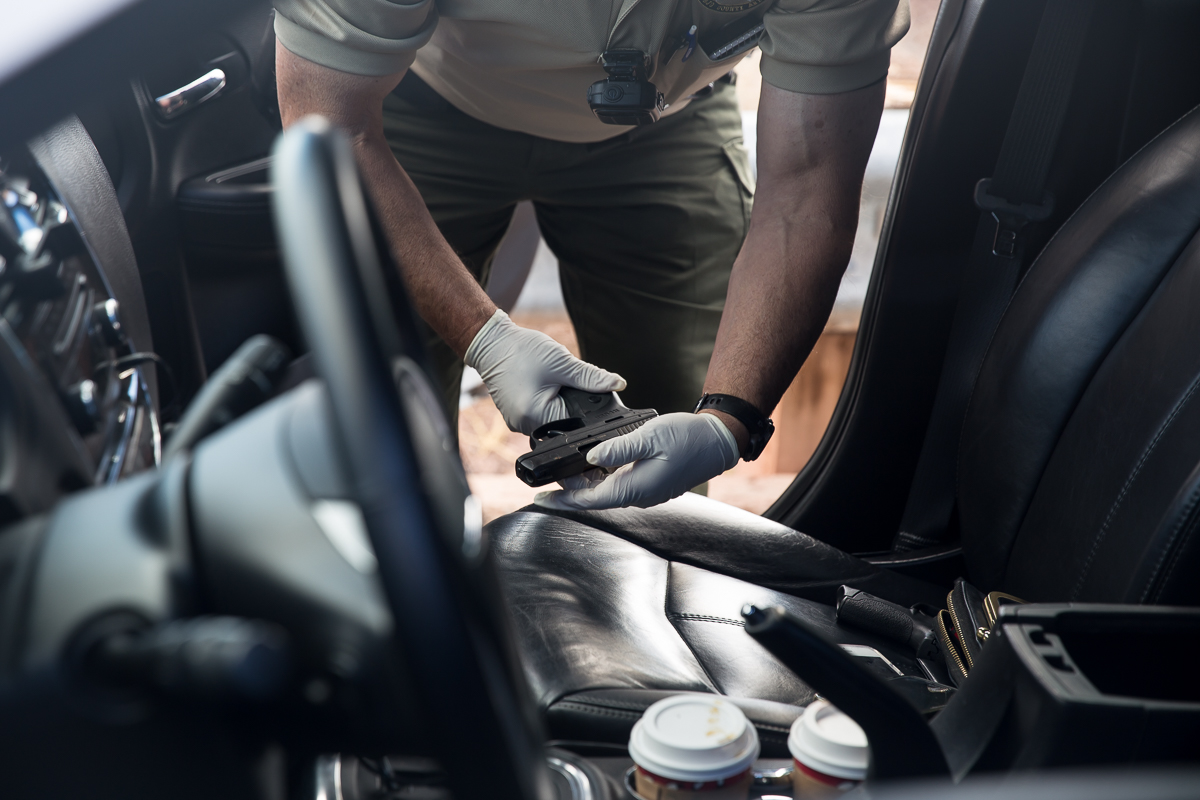 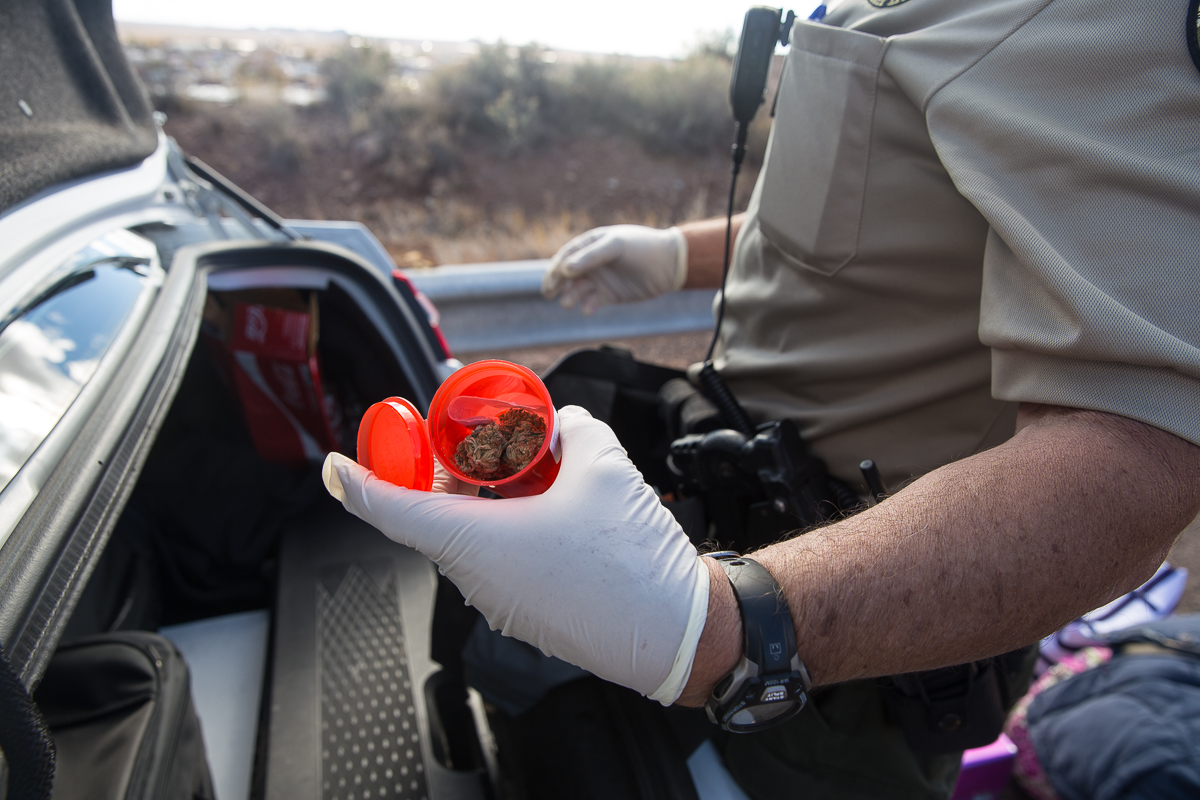 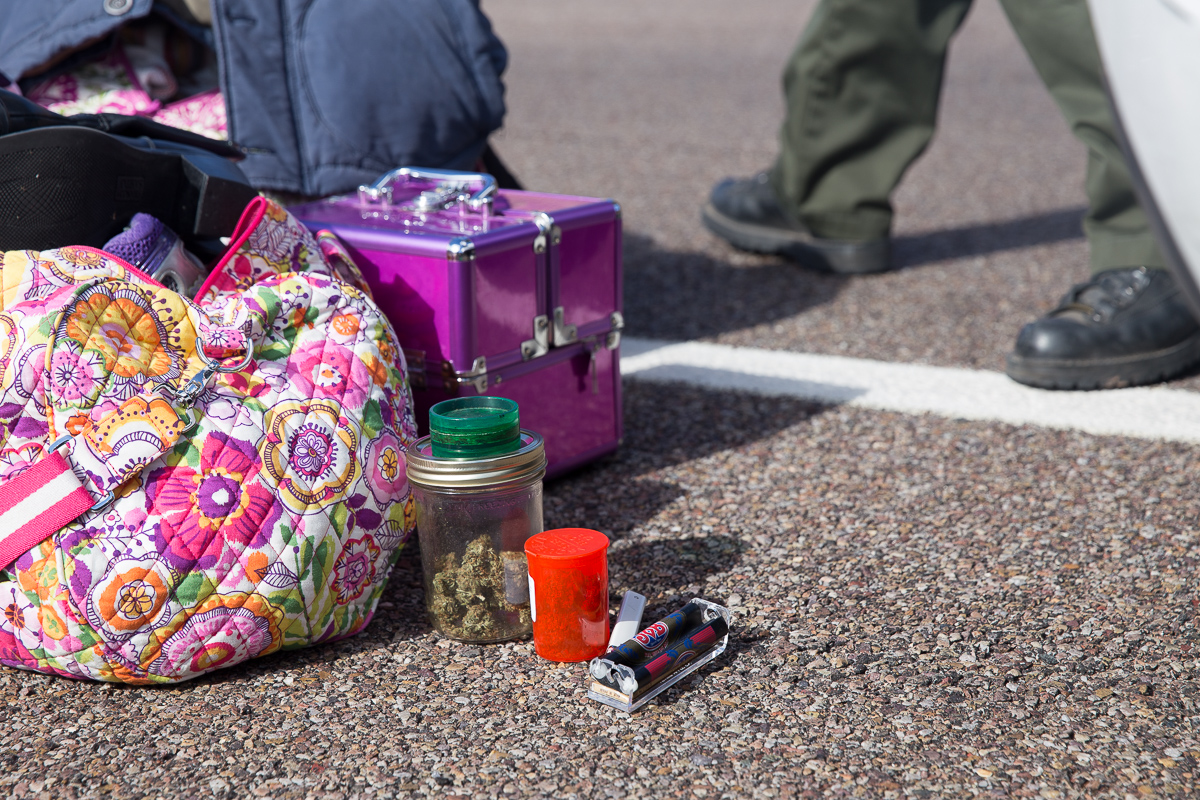 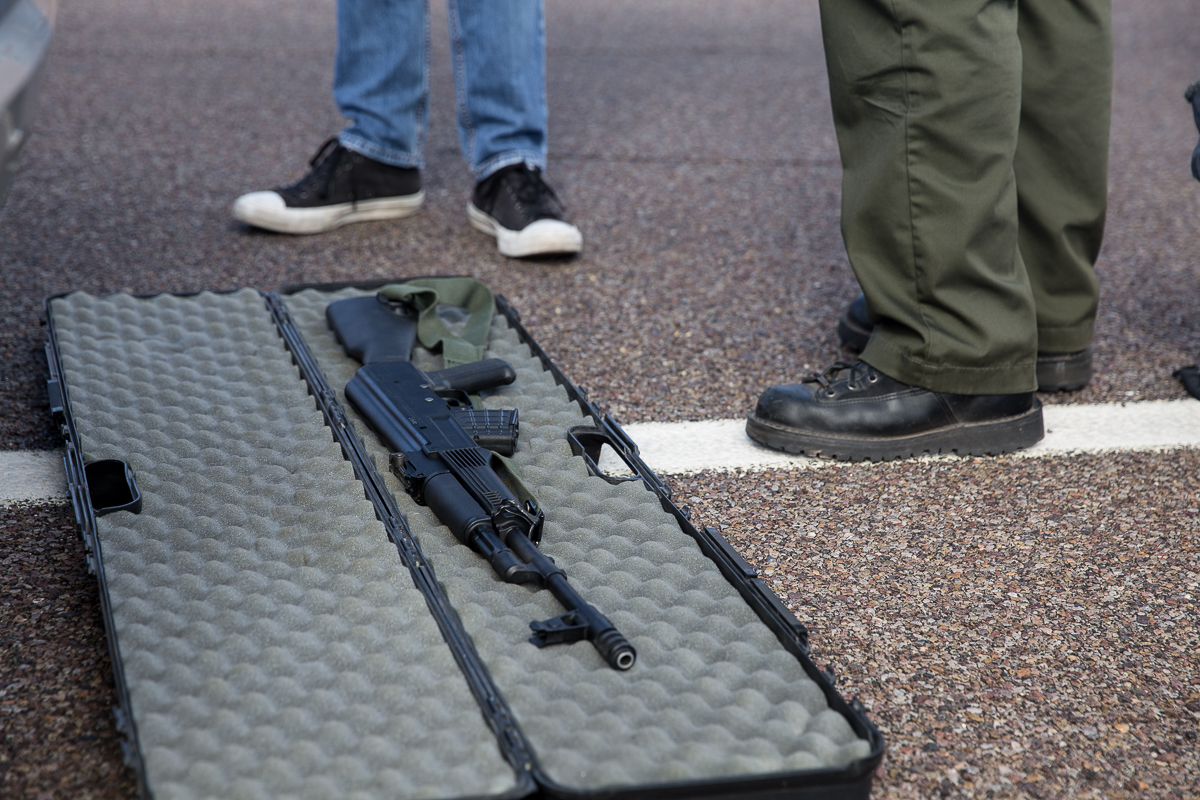